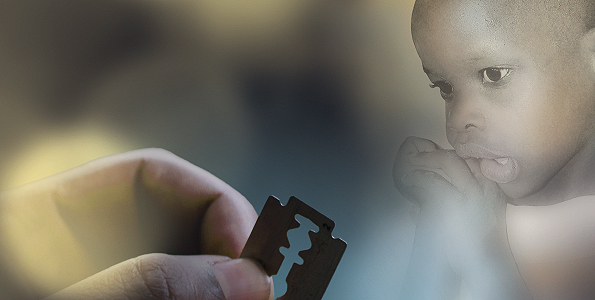 One blade, a scared girl, lots of blood

The three young girls shuffle along, their faces a mask of fear and anxiety as they trail their headteacher into her office. Two of them, barefoot and skinny, are in nursery school, while the third one, in plastic sandals and school uniform, is in Standard One.

Once inside, their faces crease into innocent smiles in response to their headteacher’s words of endearment and encouragement and, albeit shyly, they extend they tiny hands in shaky greetings as they are introduced to their visitors.

Introductions done, the girls retreat back to their little shells, the smiles gone. That was all they could afford, all the courage they could muster. Deep inside them, they are still grappling with a mental struggle so huge it could fell the strongest of souls.

The scars of their torment are yet to heal, and the blot left behind by their collective ordeal is as evident in their faces as it is in their interactions with their peers.

At the tender age of less than seven years, these girls have joined thousands of others across (especially) the northern frontier who have gone through a brutal yet mandatory rite of passage: circumcision. The activists in this part of the world, however, prefer to call the torment Female Genital Mutilation.

And wherever the word ‘mutilation’ appears, you can be sure it is used to describe a scene full of tears, struggles and blood.

We traced these little angels to their humble Furaha Primary School, buried deep inside Village Nine, one of the 10 dusty hamlets that form the Bura Irrigation Scheme settlements.

Located some 370 kilometres north of Mombasa along the Garsen-Garissa highway, Bura falls within the Tana County, which comprises Tana Delta, Tana River and Tana North districts, and is home to the Malakote, Wailuana, Munyoyaya, Wardhei, Orma and Wata sub-tribes.

The communities here have resolutely clung to FGM as a rite of passage for girls, making the region one of the best known last bastions of this brutal, outdated and illegal practice.

The two nursery school girls, whose names are withheld to protect their identity and cushion them from any form of stigma, were among seven that were subjected to the FGM by a grandmother in her smoky mud hut inside Village Nine in early August.

The villagers chose the April, August and December school holidays for the activity as the children have time to heal before they resume learning.

“When they do it during the holidays, it is difficult for teachers to know. They ensure the children have already healed by the time they return to school,” said the school’s headteacher, Ms Margaret Githire.

This way, the matter is kept from the knowledge of teachers as the girls do not miss school and, after their ordeal, resume class and continue with life as if nothing has happened.

This time round, however, luck eluded a group of 10 parents, the circumciser and relatives who had turned up to witness the event.

Shortly after the circumciser finished her gruesome job and laid the girls in her room to recover — where they were to endure weeks of agony — armed policemen stormed the compound and arrested all. The officers from Bura Police Station had been tipped about the ritual and tactfully left their car some kilometres away, then sneaked into the passage ceremony.

After arresting the adults, they took the minors to the Hola District Hospital, where they were immediately admitted for treatment.

Out of the 10 suspects, eight — among them mothers of the girls and the elderly grandmother who carried out the circumcision — pleaded guilty to the charge and were sentenced to serve varying durations of community service, while the two who denied are still awaiting the determination of their case.

After weeks of treatment and convalescence, the girls were released, went back home and have since resumed learning in their different schools. But this is only one of the few instances when the law has come to the rescue of the victims, albeit belatedly, and brought justice their way.

Multiple interviews with sources within the villages across the three districts reveal that scores of young girls are seasonally subjected to FGM, but little comes to light due to a conspiracy of silence among family members.

The interviews unearthed deep-seated cultural stereotyping that has served to buttress FGM into the society.

Women, and particularly the old grandmothers, have been accused of fuelling the act as they are directly involved in the entire process, from identifying potential initiates, organising the rite and taking care of the convalescing girls.

And it is all aimed at making the targeted girl a complete woman; one that would not be shunned by her peers or, later in life, her husband.

Khadija Maro, a mother to one of the seven girls, says this is one reason why a grandmother would pull all stops to ensure her grand-daughter is “cut”.

As a bonus, a grandmother who oversees circumcision of her granddaughter(s) is also guaranteed higher social recognition and the prestige that comes with it, she adds.

“The traditional rule is that if a woman does not circumcise her granddaughters, she is cut off from her group,” adds Ms Maro of this cultural predisposition that smacks of pure female jingoism.

Girls who have undergone the rite also taunt their uncircumcised colleagues, fuelling the stigmatisation that drives many to embrace FGM.

But the women are also quick to point an accusing finger at their menfolk, who, they say, would not marry or allow their sons to marry a girl who is not circumcised.

“When a man marries a woman who is not circumcised, his colleagues also taunt him. The woman also becomes a subject of ridicule. These are the things that many opt to avoid by allowing their daughters to be circumcised,” says another villager, Ms Asha Abdullahi, 27 and a mother of five.

But these are the stereotypes that anti-FGM campaigners want to stamp out as they take the bull by the horns in a bid to rescue the girl-child from this painful and outdated cultural practice.

Sadia Hussein, 21, is the face of the anti-FGM campaign in the three districts of Tana, and says time has come for the Kenyan society to unequivocally reject FGM, and for communities still embracing it to be told, in no uncertain terms, to discard it.

The married mother of one girl is herself a victim of the same and does not hide her loathing. To her, FGM is not only a tool for subjugating women, but also an unnecessary painful act.

“After going through it all, I resolved that I will never allow my daughter to experience it,” she told the DN2 team in Hola town, the base of her FGM campaigns.

Sadia is particularly bitter that it is the womenfolk who champion the practice. She also had a feel of the pain at seven years, and the episode is still fresh in her mind, the passage of time notwithstanding.

“My father did not want me to go but my mother, and my grandmother insisted that I must be circumcised until he relented. They were joined by five other women early one morning, then, together, escorted me to a nearby forest.”

As one woman planted her palm against Sadia’s mouth to prevent her from screaming, others spread her legs and pinned her down with their weight, allowing the circumciser to carry out her work unhindered.

From her recollection, the violation took about half an hour, but it was like eternity. Wave upon wave of agony swept over her as the sharp razor blade dug into her most intimate part, drawing flesh and torrents of blood.

“Before the experience, I had been sweet-talked into embracing it with pride, believing it would make me a whole woman. But the pain made me decide that it was not worth it,” Sadia narrates, her face burning with indignation.

So serious were her injuries that she was bedridden for two months. All this time, the only medicine she was given were herbal concoctions, some of which were used to clean the wounds.

Though the blade wielder has since died, Sadia says the central role women play in administering the cut has made her focus on them with her message.

The hands of a mother are meant to impart love and affection, not needless, excruciating pain, she says.

“I have seen circumcised girls engaging in prostitution and having children whose fathers they cannot tell. The feelings are in the minds and if one is inclined to go astray, circumcision alone cannot prevent that.”

Her efforts attracted the attention of government departments and non-governmental organisations such as Action-Aid, which have since been giving support to her outreach programmes that target schools, villages and other forums.

In 2007, Sadia founded the Tana River Women Against FGM and HIV/Aids Group, and has since teamed up with others such as Women for Peace, Maendeleo ya Wanawake and Sauti ya Wanawake to mount a united front against FGM.

Speakers at a meeting attended by representatives of these groups concurred with Sadia, saying the practice exposed girls to all forms of traumatic experiences, among them complications during childbirth later in adulthood.

“A good number of women who have been circumcised have to undergo a second operation while giving birth to enable the child pass. We must stop this practice,” Ms Fatuma Galgalo, chairperson of Women for Peace, told the meeting.

A resident, Mr Hassan Barisa, agreed, citing a recent case in Garsen where a young woman on the throes of giving birth died due to complications arising from FGM-related deformities in her genitalia.

“The child could not pass out due to the narrowness of the passage and she died as we watched. The doctor at the hospital could not do anything as only a Caesarian Section would have helped,” said Mr Barisa.

Dr Fred Mokano, the Hola District Hospital medical superintendent, says FGM exposes girls to a host of medical problems, particularly if they have pre-existing conditions such as anaemia and diabetes.

The unhygienic conditions under which the villagers carry out the circumcision expose the girls to many risks as well, among them that of HIV infection.

To eliminate other infections, girls brought to the hospitals are given antibiotics to ward off bacterial infections. For HIV, medics administer a form of medication referred to as Post Exposure Prophylaxis (PEP), which, however, is only effective if the victims are brought to hospital within 72 hours after exposure.

“The problem is that some of the girls are brought to hospital even a week after the incident. In such cases, we only deal with treating the wounds until they heal,” Dr Mokano said.

With the practice now outlawed, many girls are suffering in their hidden villages as parents fear they would be arrested should they bring them to hospital, he adds.

A senior education officer in Tana River District says the vice is to blame for the decline in the number of girls in upper primary classes across the three districts.

The officer, who asked not to be named as he is not allowed to comment on education policy issues, said whereas girl:boy enrolment is nearly 50:50 in lower primary, the numbers change in favour of the boys as a good number of girls drop out to get married, more so after circumcision.